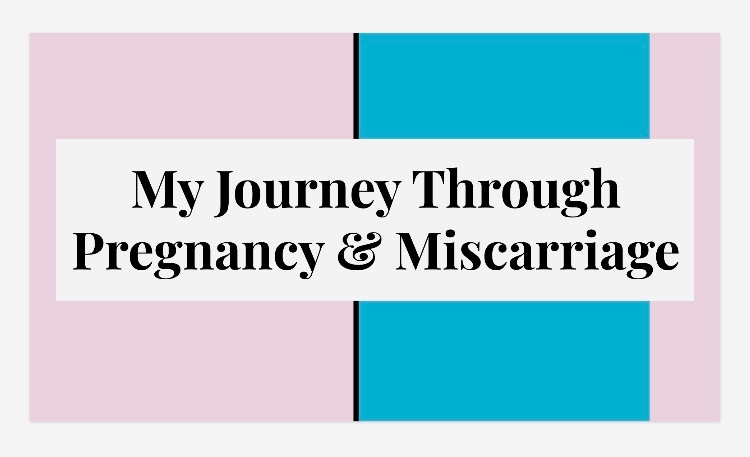 This post is a little more personal than my other ones and I will be sharing some uncomfortable details because it is about pregnancy and miscarriage. I know these topics are not interesting for everyone, so if you don’t want to read about these maybe skip this one?

Although my pregnancy started in May, I didn’t miss my period until the beginning of June. By the time I decided to take a pregnancy test my husband and I had been joking around that I was pregnant and surprise, I was!

I had all the feelings. I was excited, I was filled with dread, I felt unprepared, I felt like I could handle it, and I felt like we both were going to be great parents.

We announced the pregnancy to my dad and Mike’s dad for their Farther’s Day gifts. We didn’t really post it on social media because we were waiting until I was further along so we could use a bump picture.

My pregnancy was pretty easy as far as my symptoms went.

During June I had some heartburn and had to pee every 10 minutes. I also had some spotting at 6 weeks, but it wasn’t bright red and it went away after I took a nap so my OB said not to worry about and I didn’t. I also started dreaming that we were having a boy.

In July my symptoms picked up and I had aversions to all meat. I couldn’t look at it, smell it or even think about it without getting nauseous. I only threw up for real about 4 or 5 times which was pretty lucky. I had my first prenatal appointment at the beginning of my 3rd month of pregnancy. Me and the baby were healthy and we got to see our tiny baby wiggling around on the sonogram and the heart rate was 169 beats per minute.

In August my pregnancy symptoms were still nausea, frequent urination, food aversions, and some cravings but I was beginning to feel better. I thought it was because I was almost done with the first trimester which is when most early pregnancy symptoms go away. I also had my second appointment which was at the beginning of my 4th month of pregnancy, and I was so excited because I was going to hear the baby’s heart beat for the first time on the doppler and we were going to find out the gender via a genetic test.

At my August appointment I found out that the baby had passed away which was a humongous shock because I still had all my pregnancy symptoms and during my pelvis exam my OB said my cervix wasn’t dilated so the chance of miscarriage was low.

I was diagnosed with a missed or incomplete miscarriage when my OB couldn’t detect a measurable heart rate for the baby via doppler, two low-tec sonograms, and one high-tech sonogram. The baby was also the same size as he/she was in July.

At this point in time I was told I had 3 options:

When I got home from my appointment I was inconsolable, but thankfully my husband was given the rest of the week off which was so wonderful because we were able to be sad and eat our feelings together.

My husband and I decided to try the medication and if that didn’t work we would do the surgery. I was told when I miscarried I would have cramps, a heavier than usual mensural period, maybe I would see some blood clots, and it would take about 4 hours.

The weekend after my August appointment I took the medication vaginally. 4 hours later when I thought it would be over, nothing had happened except some mild cramps. Then I got up to use the restroom and all of a sudden things started happening.

It felt like someone popped a water balloon. This was my first pregnancy so I wasn’t familiar with the sensation of having my water break and to be honest I didn’t even know that could happen in a miscarriage.

After that my cramps were terrible. I was getting doozy cramps about every 5 minutes that would last about a minute each. I did see a tiny lime sized baby which broke my heart and was very unexpected because I was told the baby would be too small to see. About a half hour after this, I had another lime sized clot which I can only assume was the afterbirth.

After that, I started to bleed and the amount of blood loss I experienced was tremendous. I was using the biggest elephant sized pads Walmart sold and I ended up needing to change my pad every hour or so.

It took about 8 hours from the time I took the medication until I passed the baby. Apparently this is when the miscarriage is considered over and I honestly thought things were going to wind down and that would be the end of that. But I continued bleeding heavily for about 4 days, light bleeding for about 5 days and spotting for about a week. Then everything pretty much back to normal.

I am now considered a “high risk” patient because of the miscarriage. I did get back on birth-control just so I can give myself some time to heal both physically and emotionally.

The genetic results come back and the baby was a boy just like I had dreamed he was. He also had a genetic abnormality which is known to cause heart issues. My OB told me that this was likely the reason he had passed away.

I know this was a really long post with a lot of personal details but I hope that the information in here might be helpful to anyone going through a similar situation.

Published by Laundry and Dishes

This site uses Akismet to reduce spam. Learn how your comment data is processed.

Hello and welcome to the blog Laundry and Dishes! My name is Naomi and I write about my experiences as newlywed traditional homemaker in a modern world.

Your How To Guide To Internet Marketing